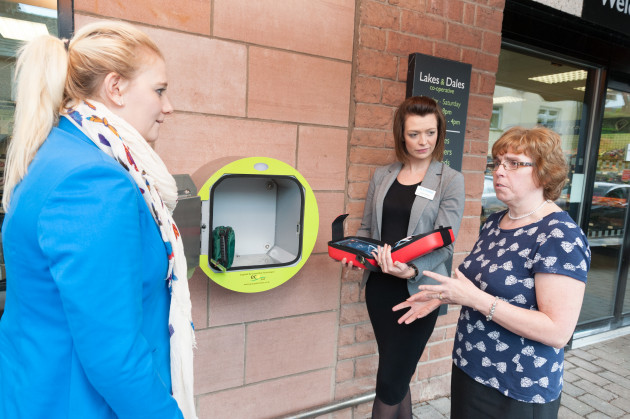 The Lakes and Dales Co-operative store in Lazonby, Cumbria has unveiled an ecopad; a new external cabinet for the store’s community public access defibrillator (CPAD). A defibrillator was placed in the store as part of a wider initiative by Scotmid.  Scotmid has been working with local ambulance services since 2011 to bring defibrillators to communities where they are most needed such as remote communities, places of high cardiac arrest and areas of high footfall.

The Lakes and Dales branch in Lazonby is the first of Scotmid’s 42 defibrillator stores to have an ecopad fitted and the co-operative is considering which of its other communities may be suitable to receive the same equipment.

Built to cope with the challenges of the British climate, the ecopad features a frost protection heater, an internal light for use at night time, single hand entry and a mechanical lock.  Developed locally by Flusco based, Green Urban Technologies, the ecopad makes the defibrillator available to the Lazonby community twenty four hours a day rather than just during store opening hours.  The cabinet can only be opened using a unique code which is held by the North West Ambulance control centre and also within the store so that anyone in the village calling an ambulance in an instance of cardiac arrest can be advised of the code to retrieve the defibrillator. Lauren Watson, Chain of survival County Coordinator in Cumbria for the North West Ambulance Service Trust, has championed the ecopad to be installed at the Lakes and Dales store and has supported Scotmid in ensuring that the ecopad is up and running correctly. Lauren said, “The chances of surviving a cardiac arrest are small under any circumstances but they are especially small in a place like Lazonby which sometimes sees long waiting times for an ambulance. The ecopad is a fantastic addition for the Lazonby community as it makes their CPAD available around the clock if it’s ever needed.”

Katie Kipling, Membership and Community Officer for Lakes and Dales Co-operative stores said, “Scotmid has invested a great deal in ensuring that we have our public access defibrillators where they might be needed most.  The ecopad we’ve installed at our Lazonby store is the natural progression for these and we hope to continue to place them in our most remote communities.  Not only does it make the defibrillator more readily available, placing it outside the store like this ensures that everyone knows about it, which is absolutely vital.”

Lauren added, “It’s important to remember, although the defibrillator is a great community resource, if a person has collapsed and is not breathing normally the first thing to do is phone and ambulance and follow the advice from the control centre.”